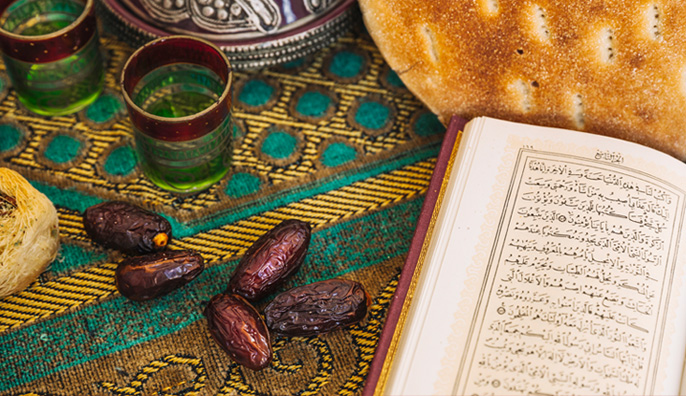 We shall mention only two, by way of example, of the more than five hundred fruits of the Miraj (Ascension: Firstly, one fruit has brought to the universe and mankind a treasury, a gift of pre-eternal and post-eternal Light, which is to see with the eyes the truths of the pillars of belief and to behold the angels, Paradise, the hereafter, and even the All-Glorious One. It raises the universe from an imaginary state of wretchedness, transitoriness, and disorder and, through that Light and fruit, shows its reality, which is its consisting of sacred missives of the Eternally Besought One and being a beautiful mirror to the beauty of Divine oneness. It has made happy and pleased the universe and all conscious beings. Furthermore, through this Light and sacred fruit, it shows that man is not merely bewildered, wretched, impotent, impoverished, with endless needs and innumerable enemies, ephemeral and impermanent, which is like the state of misguidance; it shows man in his true form of being a miracle of the Eternally Besought One’s power on ‘the most excellent of patterns,’ a comprehensive copy of the Eternally Besought One’s missives, an addressee of the Pre-Eternal and Post-Eternal Monarch, the special bondsman, the admirer and friend of His perfections, the lover bewildered at His beauty, and a beloved guest appointed to eternal Paradise. It has filled all human beings who are true human beings with infinite joy and infinite longing. Secondly, this fruit has brought to jinn and man as a gift the fundamentals of Islam, and first and foremost the prescribed prayers, which constitute those things pleasing to the Sustainer, the Ruler of Pre-Eternity and Post-Eternity, Who is the Maker of beings, Owner of the universe, and Sustainer of all the worlds. To discover the things that please Him brings such happiness it cannot be described. For how eager is everyone to find out, from a distance, the desires of a powerful benefactor or generous king, and if they find out, how delighted they are. They say longingly: “If only there was some means by which I could communicate with that personage directly. If only I could learn what he wants of me. If only I knew what would please him that I could do.” Man, then, should understand just how necessary it is to be desirous and eager to discover the wishes and pleasure of the Ruler of Pre-Eternity and Post-Eternity. For all beings are in the grasp of His power, and the beauty and perfections to be found in all beings are but pale shadows in relation to His beauty and perfection, and being needy for Him in innumerable ways, man constantly receives countless numbers of His bounties. Thus, as a direct fruit of the Miraj, Muhammad (S.A.W) heard with utter certainty what it is that pleases the Monarch of Pre-Eternity and Post-Eternity, behind seventy thousand veils, and returning, brought it as a gift to mankind. Indeed, how curious is man to learn the conditions on the moon. If someone was to go there and return bringing news of it, both what self-sacrifice he would display, and, if he was to understand the conditions there, how he would be overcome by wonder and curiosity. But the moon is merely touring in the domain of a Lord of such dominion that it encircles the globe of the earth like a fly, and the globe flies round the sun like a moth, while the sun is one lamp among thousands and is just a candle in a guest-house of that Glorious Lord of All Dominion. Thus, Muhammad (S.A.W.) saw the works and wonders of art and treasuries of mercy in the everlasting realm of this All-Glorious One, and he returned and informed mankind. And so, if mankind does not listen to him with complete wonder, curiosity, and love, you can understand how contrary to reason and wisdom is their attitude.

Clearest Mirror to Reflect Personality of a Reformer

It is said that best criterion…