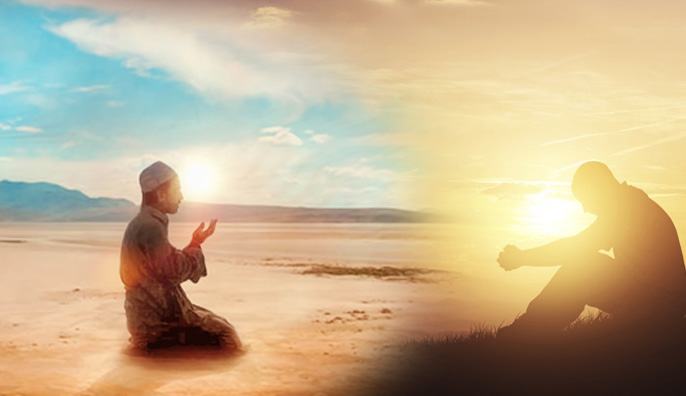 O one afflicted with the sickness of scruples! Do you know what your scruples resemble? A calamity! The more importance they are given, the more they grow. If you give them no importance, they die away. If you see them as big, they grow bigger. If you see them as small, they grow smaller. If you fear them, they swell and make you ill. If you do not fear them, they are light and remain hidden. If you do not know their true nature, they persist and become established. While if you do know them and recognize them, they disappear. And so, I shall explain only five ‘Aspects’ which, of the many sorts of these calamitous scruples, are those which most frequently occur. Perhaps it may be curative for you and for me, for these scruples are such that ignorance invites them and knowledge repulses them. If you do not recognize them they come, if you do recognize them they go.

Satan first casts a doubt into the heart. If the heart does not accept it, it turns from a doubt into abuse. It depicts before the imagination some unclean memories and unmannerly, ugly states which resemble abuse, and causes the heart to declare: “Alas!”, and fall into despair. The person suffering from scruples supposes that he has acted wrongfully before his Sustainer and feels a terrible agitation and anxiety. In order to be saved from it, he flees from the Divine presence and wants to plunge into heedlessness. The cure for this wound is this:

O wretched man suffering from scruples! Do not be alarmed! For what comes to your mind is not abuse, but something imaginary. And like to imagine unbelief is not unbelief, to imagine abuse is not abuse either. For according to logic, an imagining is not a judgement, and abuse is a judgement. Moreover, those ugly words are not the words of your heart, because your heart is saddened and sorry at them. Rather they come from the inner faculty situated near the heart which is a means of Satanic whisperings. The harm of scruples is imagining the harm. That is, it is to suffer harm in the heart through imagining them to be harmful. For it is imagining to be reality an imagining which is devoid of judgement. Also, it is to attribute to the heart Satan’s works; to suppose his words to be from it. Such a person thinks it is harmful, so it becomes harmful. That is anyway what Satan wanted.

It is this: when meanings arise in the heart, they enter the imagination stripped of form; it is there that they are clothed in an image or form. The imagination, always affected by some cause, weaves images of a sort. It leaves on the way the images of the things to which it gives importance. Whatever meaning passes through it, it either clothes it, or wears it, or taints it, or veils it. If the meanings are pure and clean, and the images, dirty and base, there is no clothing, but there is contact. The man with scruples confuses the contact with being clothed. He exclaims: “Alas! How corrupted my heart has become. This lowness has made me despicable!” Satan takes advantage of this vein of his. The cure for such a wound is as follows:

Listen, O you unfortunate! Just as outward cleanliness, which is the means to the correct conduct of your prayers, is not affected by the uncleanness of the inside of your inner organs, and is not spoiled by it, so the sacred meanings being close to unclean forms does not harm them. For example, you are reflecting on some Divine signs when suddenly you feel ill, or an appetite, or a stimulation like a need to pass water. Of course your imagination will see whatever is necessary to cure the ill or answer the need, and will look at it, weave lowly forms appropriate to them, and the meanings that arise will pass between them. But there is no harm in their passing, nor soiling, nor error, nor injury. If there is any mistake, it is in paying them attention and imagining the harm.

If you say: “What is the wisdom and purpose in scruples being visited on us, which are thus harmful and an affliction for believers?”

The Answer:  On condition they do not lead to excess or overwhelm a person, essentially scruples are the cause of vigilance, lead to seeking the best way, and give rise to seriousness. They banish indifference and repulse carelessness. Therefore, in this realm of examination and arena of competition, the Absolutely Wise One put them in the hand of Satan as a whip of encouragement for us. He strikes it at our heads. If it hurts excessively, one must complain to the All-Wise and Compassionate One, and say: “I seek refuge with Allah from Satan the Accursed.”

Du'a For Happiness in This Life and Next

Whoever makes this fleeting life…

If You Love Allah...

Profound Answer to the Criticisms on Risale-i Nur